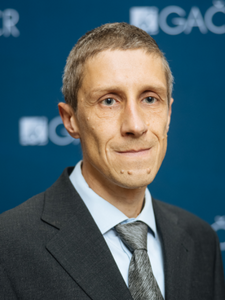 Born in 1972 in Prague. Studied microbiology at the Faculty of Science of the Charles University in Prague. His scientific work focuses on the ecology of soil microorganisms, contribution of bacteria and fungi to ecosystem functioning and the use of microorganisms in biotechnology.

Petr Baldrian is the head of the Laboratory of Environmental Microbiology of the Institute of Microbiology of the Czech Academy of Sciences. He is the principal investigator of national and international projects, e.g. the Horizon 2020, FP7 – Marie Curie lnternational Training Networks, Facilities Integrating Collaborations for User Science EMSL/JGI (USA), Czech Science Foundation, Ministry of Education, Youth and Sports of the Czech Republic and Ministry of Agriculture of the Czech Republic.

He is a supervisor of students of bachelor, master and doctoral degrees and teaches „Geomicrobiology“, „Microbial processes in the Environment“ and „Microbial Ecology“ at Charles University, Prague and „Selected chapters from Microbiology“ at the Comenius University in Bratislava.

He published 11 chapters in books and 200+ papers in impact factor journals with more than 15 000 citations. His research was awarded, for example with the Prize of the President of the Czech Science Foundation for the project „Ecological role of saprotrophic fungi, degrading lignocellulose in forest soils“ (2008), Prize of the Minister of Education, Youth and Sports for excellence in research (2015) and Praemium Academiae of the Academy of Sciences of the Czech Republic (2017). Petr Baldrian is the editor of ISME Journal, Microbiome, FEMS Microbiology Ecology and Fungal Ecology. He is also the national ambassador of the lnternational Society for Microbial Ecology for the Czech Republic and the founder of a series of international conferences „Ecology of Soil Microorganisms“. 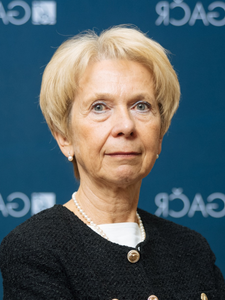 Her research activities have focused on national accounts and other areas of economics and social statistics. She played a significant role in the harmonisation of the Czech state´s statistics before the accession of the Czech Republic to the EU and she has been cooperating with the Czech Statistical Office in the long term.

In the 1990s she worked as a visiting professor at French universities such as Université Nancy – Metz, Institut National Polytechnique de Lorraine and Université Paris 1 – Panthéon-Sorbonne. In 2001–2006, she was the Vice-Dean for Research at the Faculty of Informatics and Statistics of the University of Economics in Prague and in 2006–2014, she was the Vice-President for Research of the same University. She is a member of numerous scientific boards (e.g. University of Economics in Prague, Czech Technical University in Prague, Technical University in Liberec) as well as a member of National Technical Library´s Strategy and Development Council, a member of the Executive Board of the Politická ekonomie journal, the Editor-in-Chief of the Statistics and Economy Journal, etc.

Since 2014, she has been a member of the Presidium (since 2016 as a Vice-President) of the Czech Science Foundation; she is responsible for Social Sciences and Humanities. 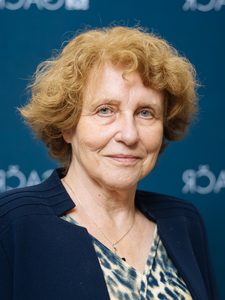 Alice Valkárová was born in 1947 in Brno. In 1970 she finished her studies of nuclear and particle physics at the Faculty of Mathematics and Physics of Charles University in Prague. She gained her Ph.D. in 1980 in Russia (former Soviet Union) during her long-term stay (1973-1980) at the Joint Institute for Nuclear Research in Dubna. The subject of her studies was the analysis of antiproton-proton interactions. She was awarded with the Joint Institute of Nuclear Research prize in 1982. In 1997 she started participating in the H1 experiment which studied electron-proton interactions at the HERA electron-proton particle accelerator in DESY laboratory (Hamburg, Germany). She spent two years working at this experiment in Hamburg. She was a member of the Executive Committee of the H1 experiment for 3 years. From 2006-2014 she was the President of the Czech Physical Society and a member of the Presidium of the Union of Czech Mathematicians and Physicists. From 2012 she served six years as a member of the Evaluation Panel of the European Research Council. She has supervised nine Masters and seven PhD theses. In 2015 she received the Milada Paulová Award for physics, which was awarded to her by the Ministry of Education, Youth and Sports, Czech Republic. Prof. Jirsa graduated from the Faculty of General Medicine and the Faculty of Science of Charles University. He received his professorship from the First Faculty of Medicine, Charles University. After obtaining specialised qualifications in clinical biochemistry, Prof. Jirsa began to deal with photodynamic therapy of tumors, soon moving on to the study of disorders and molecular mechanisms of bile secretion. Prof. Jirsa gradually extended his interest to the genetics of liver diseases. His work and publications contributed to the clarification of the molecular cause of hereditary jaundice, metabolic liver diseases, and congenital amyloidosis type AA. In addition to Mendelian inherited diseases, he is also involved in the study of hereditary factors predisposing to rapid progression of liver damage of various etiologies, and to the development of hepatocellular carcinoma, and the possibilities of suppressing their influence.

In the course of his scientific career to date, he has published more than 80 original scientific papers in international journals and supervised 10 PhD students and postdocs. From 1999 to 2002, he completed a long-term residency at the Academisch Medisch Centrum in Amsterdam. He serves on the scientific boards of IKEM, FZO PU and Crigler-Najjar Stichting, a foundation in the Netherlands. He has been awarded a number of grants and led numerous scientific projects.

In November 2021, the Government of the Czech Republic appointed Prof. Jirsa to the Presidium of the Czech Science Foundation. Prof. Hartl’s scientific, research and development activities are mainly focused on tribology, biotribology and high-pressure rheology. He participated in the establishment of the tribology research group at the Faculty of Mechanical Engineering of the Brno University of Technology, which has gained an international reputation especially in the field of elastohydrodynamics. He developed and implemented a method of colorimetric interferometry, enabling the determination and visualization of lubricating film thickness distribution in elastohydrodynamic contact. The method is now used by a number of research institutions worldwide.

He has published more than 120 scientific articles in high-impact journals. The acclaim of his work is evidenced by more than 1,800 citations and an H-index of 21 according to Web of Science. He has received several awards for his work, such as the Society of Tribologists and Lubrication Engineers award, and the Japanese Society of Tribologists award.

He is the director of the Institute of Machine and Industrial Design at the Faculty of Mechanical Engineering of the Brno University of Technology, which he transformed into an internationally recognized research and educational institution. He is the principal investigator within several strategic projects. He has been developing a research-oriented concept of teaching on a long-term basis.

He is the guarantor of the Master’s degree programme in Structural Engineering, which he founded, and the Doctoral degree programme in Structural and Process Engineering. He is a supervisor in doctoral studies and 7 students have defended their dissertations under his supervision. He led the translation team and scientific editorial board for the Czech translation of the world-renowned textbook Shigley’s Mechanical Engineering Design.

He was appointed member of the Presidium of the Czech Science Foundation in March 2022.

The Scientific Advisory Board (SAB) is the conceptual body of GACR. SAB consists of 12 expert members who are appointed and recalled by the Government of the Czech Republic on the Research and Development Council´s proposal. Members are appointed for four years with the possibility of two consecutive terms at maximum. The SAB proposes the Discipline Committees’ composition and scope focus, evaluates the GACR contribution to the development and quality of basic research in the Czech Republic, and proposes necessary measures.

The Supervisory Board (SB) is the auditing body of GACR. The SB consists of ten members who are appointed by the Parliament of the Czech Republic . Members are appointed for four years with the possibility of two consecutive terms at maximum. The main tasks of the SB consist of financial supervision of GACR, discussing and deal¬ing with complaints about violation of the conditions of Call for Proposals during the evaluation process, and proposing statements obligatory for the Presidium.

Manage Cookie Consent
To provide the best experiences, we use technologies like cookies to store and/or access device information. Consenting to these technologies will allow us to process data such as browsing behavior or unique IDs on this site. Not consenting or withdrawing consent, may adversely affect certain features and functions.
Manage options Manage services Manage vendors Read more about these purposes
View preferences
{title} {title} {title}