The Czech Science Foundation (“GACR”) has selected 16 EXPRO and 30 JUNIOR STAR projects to fund, starting next year. Both grant categories aim to support excellence in all areas of basic research. JUNIOR STAR grants are designed to give young scientists in their early careers the opportunity to carry out their own research. The EXPRO grants target innovative projects run by seasoned scientists.

Top research projects in a position to substantially enhance the development of their fields of science need special conditions. The Czech Science Foundation makes those projects happen by publishing calls for exactly such projects. When defining the conditions, the Czech Science Foundations has also taken inspiration from conditions set out for European Research Council (ERC) projects. The objective of EXPRO and JUNIOR STAR projects is not only a substantial improvement in the research environment of the Czech Republic but also a tangible scientific impact on a global scale.

“The call for JUNIOR STAR tenders was made for the first time ever this year. We were overwhelmed by the enormous interest in these grants, which are supposed to be just as selective as EXPRO grants. We are delighted to see that scientists in their early careers find it attractive to start their own research teams – the interest exceeded the original, less selective junior grants, but unfortunately, we are unable to fund more projects given the amount of funds assigned to the Czech Science Foundation from the government’s budget. Nevertheless, we have decided to fund five more projects than planned originally,” says RNDr. Alice Valkárová, DrSc., the President of the Czech Science Foundation.

The objective of the EXPRO grants is to facilitate excellence in research, set the standard of excellence in science, and also help overcome the barriers which hamper the success of project proposals in the prestigious ERC grant competition. “Within the EXPRO calls, we also fund what is called ‘high risk – high gain’ projects bringing radically innovative ideas with the potential to make a breakthrough in their fields of science,” adds Alice Valkárová. The costs of the EXPRO projects, ear-marked primarily for seasoned scientists, may amount up to CZK 50 million. The calls for EXPRO tenders will now be made in even-numbered years only, i.e. there will be no call in 2021.

A total of 123 EXPRO proposals were received in this year’s call, of which 16 will receive funding. The highest number of projects – 6 each – will be carried out at the Czech Academy of Sciences and the Masaryk University in Brno. 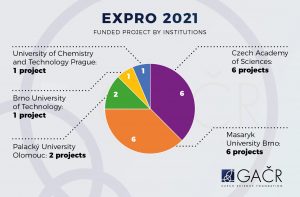 JUNIOR STAR grant projects give young explorers the opportunity to implement their own, original ideas in the early stages of their careers and, if needed, to also develop new scientific teams. Grant applications may be submitted by applicants who completed their Ph.D. programmes no more than 8 years ago (this deadline may be extended because of parent duties). The amount assigned to junior scientists will be up to CZK 25 million.

A total of 355 JUNIOR proposals were received in this year’s call – the first ever – of which 30 will receive funding. The highest number of projects – 13 – will be carried out at the Czech Academy of Sciences, and another 10 at the Charles University in Prague. 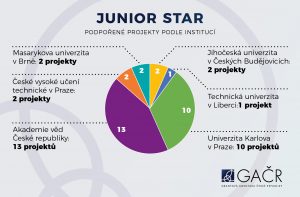 Only international experts, recommended by Science Connect, an international agency, took part in the evaluation of all the proposals submitted in the EXPRO and JUNIOR STAR tenders. There was a two-stage evaluation. Each project proposal was evaluated by at least four professionals from various countries in the given field of science.

The list of the standard projects to be launched in 2021 will be published on 1 December 2020.