The President of the Czech Science Foundation along with the Minister for Science, Research and Innovation awarded the five best scientific projects 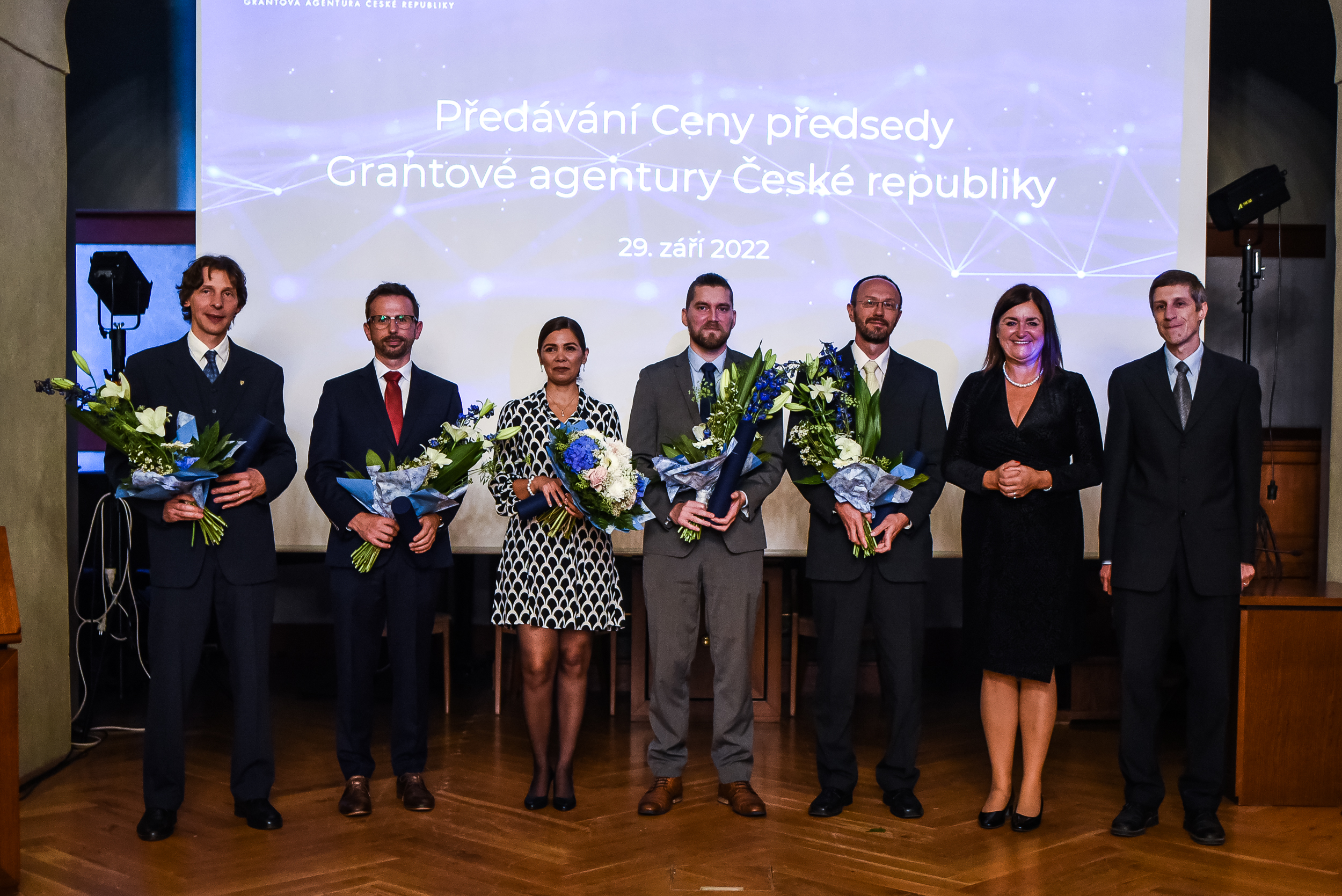 On Thursday, 29 September, five scientists from various fields of basic research received the President’s Award of the Czech Science Foundation (GA CR) for outstanding achievements. This was the 19th award ceremony in history – for the first time it was presented by Petr Baldrian, appointed President of GACR last year, together with the Minister for Science, Research and Innovation Helena Langšádlová.

The award-winning research projects have provided important insights and methods that make it possible, for example, to identify and sharpen blurry objects in a video, determine the quality of soil based on satellite data, or use machine learning to determine which texts by important authors did not actually come from their pens. The award-winning scientists have also explored how genes are switched on and off in the cell, potentially leading to serious diseases, as well as what influences the rate of ageing.

“The quality of the projects funded – and therefore that of Czech science – has grown year after year. The award-winning researchers deserve our recognition all the more – the award-winning projects have been selected from dozens of scientific projects funded by the Czech Science Foundation, all of which are among the best of the best in the Czech scientific research and even in the world,” said Petr Baldrian, President of the Czech Science Foundation. “It is also gratifying that many of the projects have a potential way forward, towards applied use or understanding of the basic principles of nature and society.”

The President’s Award has been presented regularly since 2003 in recognition of outstanding results achieved in grant projects completed in the previous calendar year. The laureates are selected on the recommendation of several hundred scientists who evaluate projects funded by GACR. Each laureate receives a financial award of CZK 100,000. Prizes are awarded in five areas of basic research: technical sciences; life sciences, medical and biological sciences; social sciences and humanities; and agricultural and bio-environmental sciences.

Solving Inverse Problems for the Analysis of Fast Moving Objects

The award-winning project has developed a method that allows to significantly improve the image quality, despite the limited technical possibilities of recording. The method relies on the fact that more information can be extracted from a blurred video than from a single sharp image – such as the 3D trajectory and angular velocity of an object. This makes it possible to reconstruct the shape, appearance, and motion of a fast-moving object. Additional image sharpening will also find applications in scientific experiments, defence, healthcare and other fields.

The Evolutionary and Functional Relationship between LEDGF/p75 and Pdp3

As part of the project, the researchers looked at how selected types of protein stretches, previously identified in studies of leukaemia and HIV infection, can affect RNA chain elongation. They have gradually untangled a wide network of interacting cellular partners that influence this process. They were thus able to uncover a previously neglected role for unstructured protein domains in ensuring this cooperation. This discovery may contribute to a better understanding of cancer, viral or neurodegenerative diseases, and other conditions that are caused by disrupted gene expression.

The project focused on identifying the authors of poetic texts using machine learning. In addition to commonly used textual features, such as word and phrase frequency data, the researchers also focused on formal features of the verse (verse rhythm, rhyme), which they were able to prove to significantly increase the reliability of the results. Using machine learning, for example, the team was able to determine which passages Henry VIII and Two Noble Kinsmen, both versed plays, were from the pen of William Shakespeare, and which were from his co-author John Fletcher.

Sources of Intrapopulation Heterogeneity in Ageing

Ageing is biologically a process of deterioration in the optimal functioning of an organism, and an increase in the risk of failure of some essential function. This project has uncovered the causes of the different rates of ageing in male and female African turquoise rockfish in nature and in the laboratory and described how environmental conditions, embryonic development and growth rate can influence the ageing process. Understanding the sources of differences in ageing rates is also important for addressing current issues in the ageing human population.

The Czech Science Foundation (GACR) is the only institution in the Czech Republic that provides targeted aid from public funds to basic research projects only. The objectives of GACR are to fund basic research projects carried out by scholars and their teams, both seasoned scientists and young ones in their early careers, to create suitable and attractive conditions for scientists, and to promote and expand international scientific cooperation. GACR launched its activities in 1993.