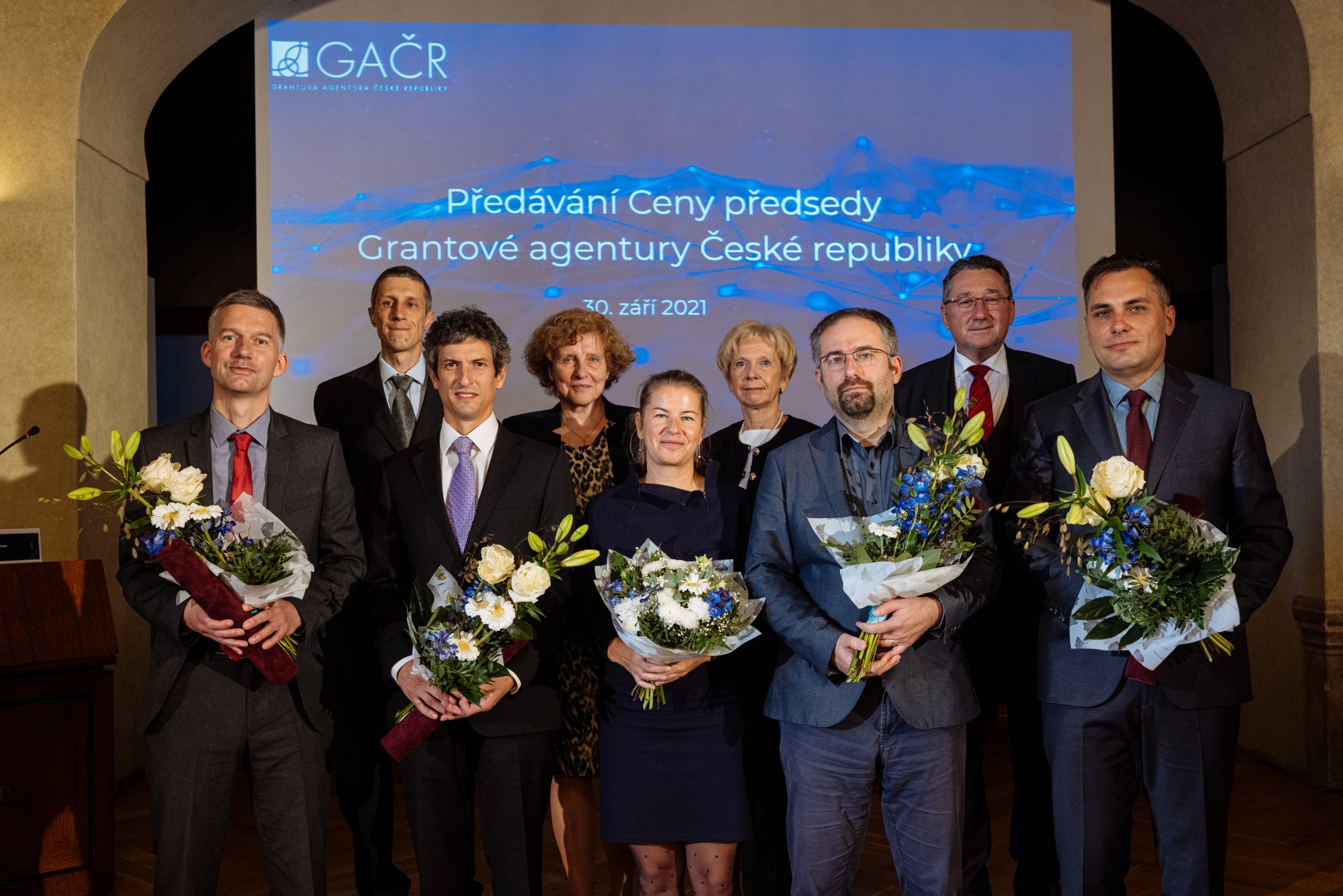 Today, five excellent scientists have received the Award of the President of the Czech Science Foundation (GACR) for outstanding results in grant projects, which was exceptionally presented this year by GACR Vice President Stanislava Hronová. The prestigious prize for the best basic research was awarded to Martin Pivokonský (Academy of Sciences of the Czech Republic), Vladimír Šindelář (Masaryk University), Zdeněk Lánský (BIOCEV Biotechnology and Biomedicine Centre as the joint venture of the Czech Academy of Sciences and the Charles University), Klára Šeďová (Masaryk University), and Marek Eliáš (University of Ostrava).

The award-winning research projects provide important insights that will make it possible to ensure the high quality drinking water, use certain organic substances in the preparation of medicines, better understand what happens inside nerve cells, improve education for school children, or better understand the evolution of cell organelles ‒ tiny structures present in the cells of plants and algae.

“Every year, the Czech Science Foundation funds hundreds of research projects selected through a transparent tender process. We are the only institution in the Czech Republic that has funded exclusively basic research projects for 28 years. We will continue to strive to create the right conditions for quality basic research so that it brings more success for Czech scientists,” says Stanislava Hronová, Vice President of the GACR.

The project investigated the effect of organic matter produced by cyanobacteria on water treatment at different mixing intensities. It produced a major finding ‒ when the mixing intensity is changed, the change in the size of the flocs that remove the water contaminants is not linear, but occurs in quantum leaps. These conditions ultimately determine how effective the entire water treatment process will be. The project has thus contributed to deepening the theoretical knowledge of water treatment by coagulation and flocculation, which can be leveraged to improve existing water treatment technologies and thus provide potable water.

The project dealt with what is called bambusurils ‒ organic substances whose molecule resembles part of the bamboo stalk, inspiring the laureate who discovered them to give them this name. He has taken a closer look at chiral bambusurils, whose molecule is not identical to its mirror image. He discovered that they are only able to preferentially bind one of a pair of chiral anions to each other, whereby pairs of anions can be split to obtain only those that exhibit the desired properties. This makes it possible to use bambusurils primarily in the preparation of pharmaceutical drugs.

In Vitro Reconstitution of the Mitochondrial Transport Complex

Thanks to this project, a mechanism has been discovered that allows molecular motors to find a viable path in the crowded interior of a cell. It has led to the discovery of how molecular motors transport mitochondria in nerve cells over long distances and how this mechanism increases the reliability of transport. The clarification of the molecular mechanism provides insights relevant to further research on the regulation of mitochondrial transport.

The project has shown, also through a dedicated app, that verbal engagement of students during school instruction enhances learning. Students who communicate during class achieve better results than those who follow the teacher’s instructions quietly. The project has produced findings that can be used by schools to enhance their students’ learning, and has also revealed that communication during class can make up for the disadvantages of students from less stimulating family backgrounds.

The Dark Side of Plastid Biology: Evolution and Function of Leucoplasts in Algae

The project has made a major contribution to a better understanding of the evolution and function of plastids ‒ cellular organelles present in plant and algal cells. It mapped the metabolic functions of the plastid of a unicellular flagellate organism, the colourless euglenid. Professor Eliáš also discovered a new lineage of non-photosynthesizing algal flagellates with an extremely large plastid genome, and uncovered a hidden plastid in an amoebic organism of the Leukarachinon genus.

Since 2003, the President’s Award of the GACR has been regularly awarded to three to five laureates in recognition of the outstanding results achieved in grant projects completed in the previous year. So far, a total of 80 exceptional scientists and their projects have been awarded (see the list here). Each laureate will receive a financial award of CZK 100,000. The prizes are awarded in five areas of basic research: technical sciences; physical sciences, medical and biological sciences; social sciences and humanities; and agricultural and biological-environmental sciences.

The Czech Science Foundation (GACR) is the only institution in the Czech Republic that provides targeted aid from public funds to basic research projects only. The objectives of GACR are to fund basic research projects carried out by scholars and their teams, both seasoned scientists and young ones in their early careers, to create suitable and attractive conditions for scientists, and to promote and expand international scientific cooperation. GACR launched its activities in 1993.